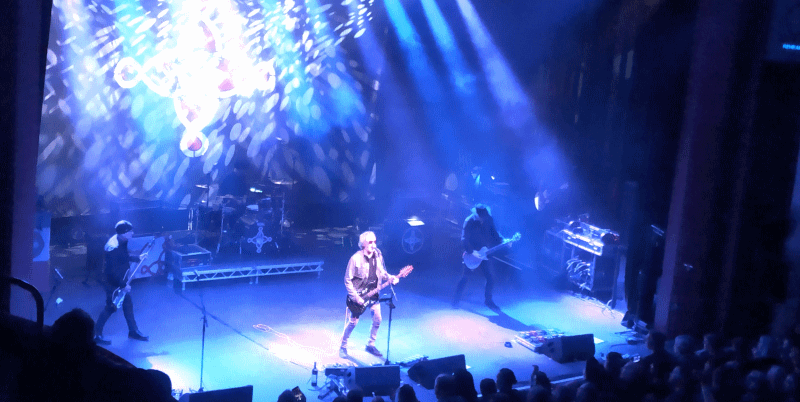 The title is slightly misleading because the “summer” started in April and will last until December. After more than two years of rescheduling and cancellation, concerts are back.

The first concert I visited was in 2021 in Manchester at Heaton Park. The New Order open-air was a unique experience for me. We were all used to social distancing, and from one moment to the other, you are part of a 30.000+ audience. That felt weird. And I am still not fully accustomed to this feeling. But let’s get back to 2022.

The concert year 2022 started with two concerts by The Mission at O2 Academy Shepard’s Bush Empire. Yes, two concerts. Those two concerts were initially planned for 2020 for the fortieth band jubilee. On the day of the first concert, I had access to soundcheck, a meet-and-greet, and got a vinyl signed by the band.

The next concert took place in London as well. Adam Ant played the Roundhouse. It was the fourth Adam Ant I attended. And, as always, he and his band delivered an energizing performance. What do I like about Adam Ant concerts the most? The two-drum set setup brings so much energy to the stage and audience.

This was a very intimate concert with a very small audience. Marc Almond played at the Passionskirche in Berlin. Marc and his band played well-known and new songs. It was very compelling to listen to song classics in new interpretations.

The concert at the Columbiahalle in Berlin was a spontaneous visit. I got hold of a spare ticket. And what shall I say? The concert was exceptional, in every sense of the word.

There was only very rudimentary interaction with the audience. The Neubauten are known for their individual and creative instruments. It was truly an experience to have seen them live once.

Yes at Royal Albert Hall. I there more to say? Actually no. I have seen Yes playing in different musical setups. That night was Steve Howe’s Yes of 2022. They changed the concert times ad hoc which was a bit annoying.

It was an entertaining evening, but it was not the best Yes concert I have ever seen. Besides the early start, the concert included a pause.

I have seen the ads for the shows for quite some time. And I wasn’t sure if I should visit a concert by the Australian Pink Floyd Show. If you have a chance, get a ticket and enjoy an entertaining evening. The show was just a fantastic show and pretty close to a real Pink Floyd show.

The Australian Pink Floyd Show was the second concert this year with a pause.

What shall I say? Iggy Pop is quite a character. The concert was powerful and entertaining. But it must have been not one of his best days. Or was it the audience? Hard to say. I had the gut feeling that it was just some mandatory concert to perform for Mr. Pop. At least the acoustic was good.

The Zürich concert kicked off my Iron Maiden Triple 2022. The concert at Hallenstadion was my very first concert attendance in Switzerland. Iron Maiden delivered a perfect show. As always, I must add. This band simply never disappoints me. It was a wonderful evening.

Just a few days after Iron Maiden’s concert in Zürich, I saw them again. This time as an open-air show at the legendary Waldbühne in Berlin. And again, the performance and the sound were delightful. Only the fire effects were less potent due to the limited stage heights available. I simply loved it.

This concert took place at Turbinenhalle 2 in Oberhausen, a small venue compared to the previous one. I have seen Steel Panther multiple times before and even at a virtual concert during the pandemic. There is not much to say if you have never been to a Steel Panther concert. You have to experience that for yourself. It is a show band and revue, just in heavy metal style.

That concert came as a complete surprise to my 2022 concert schedule. As a supporting member of The Roundhouse, I received an email about Midnight Oil’s 2022 tour. I had to see them. Midnight Oil is one of the bands that have influenced my music taste since the 1980s. The songs have always been very political and are still right on the point. It was not just an entertaining evening in regards to the music played. The songs plant a seed of thoughts in your brain.

NMA and a Symphonic Orchestra? That was an exciting experiment. The concert was another of the rescheduled concerts. The band and the orchestra had only a few days of rehearsal. Nobody would have recognized it if Justin Sullivan hadn’t mentioned it.

The symphonic arrangements of NMA’s classics supported the character of the energetic and powerful songs.

The evening before the Iron Maiden concert at Estadio Olimpico, I had the chance to visit a concert by British Lion, founded by Iron Maiden bass player Steve Harris. The band played at Sala Salamandra, a small venue near L’Hospitalet de Llobregat. Even Nicko McBrain, Iron Maiden’s drum player, showed up and enjoyed the show.

Yes, no photo of the band playing. I simply enjoyed the evening. The concert gave me shivers. Bruce Dickinson and the band played the crowd of almost50,000 people very well. The audience knows the choreography and the text of each song. What an evening.

I look forward to the next tour.

There it was. My very first and, I presume, my very last concert by The Rolling Stones. It was the final concert of the European leg of the “60” tour. The Waldbühne was more than just sold out. People were everywhere.

The Stones know their business. They know how to engage, interact, and play with the audience. It was a wonderful summer evening with excellent music. The Waldbühne was the perfect setting for closing out the European tour.

For the very first time, I left a concert early. And it was not about the music. But the band couldn’t ignite the vibe. The could have been an awesome evening. The overall mood of the audience dropped more and more when waiting for Madness to show up on stage. The concert started with one hour delay.

The two concerts in Dublin were planned as a double feature for the band’s 40th anniversary in 2020. The band celebrated the anniversary with a small crowd of fans in the 42nd year of band history at the Button Factor in Temple Bar.

The concerts were just plain amazing. Nothing more to say if weren’t part of the show. I haven’t seen the band so full of energy and joy in playing for a long time.

I look forward to the concert in November.

If you ever have a chance to attend a concert at Button Factory, just do it.

By chance, I had the opportunity to attend a concert of the Unity Tour by the Pet Shop Boys and New Order. I didn’t know exactly what to expect. Especially because I had never been to a Pet Shop Boys concert before. But what can I say? The concert was terrific. The hall went wild for both bands.

This year’s Fischer-Z for me took place at the Columbia Theater. The venue is next to the much larger Columbia Halle. It provides a much more intimate scene for concerts. Jonn Watts knew how to play the audience, and you could feel that he enjoyed it. Fischer-Z shows always feel like being with friends.

I look forward to his next tour.

What a difference. Seeing Fischer-Z in a small venue attending a show in an arena-style concert was different. The Lanxess Arena does not have the best acoustic. The Cure performed an incredible show playing most of the well-known titles in the encore. I saw The Cure for the first time, which is odd when listening to their music since the eighties. I felt lucky to finally see them live.

Another show at the Roundhouse in London. Yes, I love that venue, and I recommend becoming a supporting member of the Roundhouse. The 40 Years Metal in England tour found its end for 2022 with this concert. There is nothing more to say besides Saxon rocking the Roundhouse.

Seeed is Seeed. There is nothing more to say. Even though that Seeed is not my favorite type of music, it was a very entertaining evening. Seed concerts are considered a happening, not just a concert.

The closing concert for 2022 was New Model Army again. It was a tradition to enjoy the December New Model Army concert at the O2 Forum Kentish Town in pre-pandemic times. This year’s show took place at the Roundhouse. I stopped counting my NMA concerts some time ago.

Thank you, New Model Army, for making this year special.